Boogiepop Doesn't Laugh 2019
Boogiepop and Others 2019

*For the novel, see Boogiepop and Others.

Boogiepop Doesn't Laugh 2019 (ブギーポップは笑わない2019, Bugīpoppu wa Warawanai 2019), also referred to as Boogiepop and Others or Boogiepop 2019, is an anime adaptation of the Boogiepop Series, written by Kouhei Kadono.

There is an urban legend that tells of a shinigami that can release people from the pain they are suffering. This "Angel of Death" has a name—Boogiepop. And the legends are true. Boogiepop is real. When a rash of disappearances involving female students breaks out at Shinyo Academy, the police and faculty assume they just have a bunch of runaways on their hands. Yet some students know better. Something mysterious and foul is afoot. Is it Boogiepop or something even more sinister...?[1]

The anime was produced by Studio Madhouse, which was also responsible for Boogiepop Phantom. The series was directed by Shingo Natsume, known for One Punch Man, Fullmetal Alchemist: Brotherhood and Space☆Dandy, had the script written by Tomohiro Suzuki, known best for his work on One Punch Man, and the music composed by Kensuke Ushio, known for composing the soundtrack of Devilman Crybaby, Space☆Dandy and Ping Pong The Animation. Additionally, the character design was handled by Hidehiko Sawada, as opposed to Kouji Ogata, the original character designer for the novel series.[1]

During the production of the show, Kouji Ogata expressed his dissatisfaction with the character design for the new anime on Twitter. He claimed that he was never shown any visuals for it before the show was announced, and had no real involvement in the production.[2] An apology was later issued by Kadokawa, after an investigation into the situation. It was revealed that Kouji Ogata's lack of involvement in the project was the result of an error in communication with Madhouse. The misunderstanding was resolved, and Ogata gave consent for production to progress.[3] 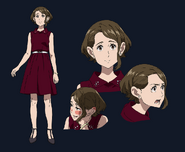 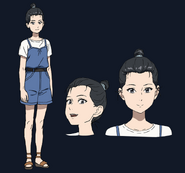 Suiko Minahoshi illustration from Vol.2
Add a photo to this gallery

Retrieved from "https://boogiepop.fandom.com/wiki/Boogiepop_(2019)?oldid=8413"
Community content is available under CC-BY-SA unless otherwise noted.