*For the character, see Boogiepop Phantom.

Boogiepop Phantom (ブギーポップ・ファントム, Bugīpoppu Fantomu), also known as Boogiepop Doesn't Laugh: Boogiepop Phantom, is an original anime based in the universe of the Boogiepop Series, serving as a kind of continuation to the first novel in the series, Boogiepop and Others.

Five years ago, a string of grisly murders shook the city to its core and now the rumors have begun once more. Boogiepop... Everyone knows about Boogiepop: meet her one dark night and you are taken. People tell each other the stories and laugh: no one believes that she can possibly exist in this day and age. Still, strange things appear to be going on and the darkness is taking on many forms. Something is out there. Are you safe?

Boogiepop Phantom was produced by Studio Madhouse, which is also responsible for the new adaptation of the Boogiepop Series. The series was directed by Takashi Watanabe and had the script written by Sadayuki Murai, with heavy involvement from Kouhei Kadono, the original creator. The character design was done by Shigeyuki Suga, heavily resembling Kouji Ogata's original illustrations for the novel series. The series was licensed and released in the United States and Europe on DVD and VHS by Right Stuf Inc. 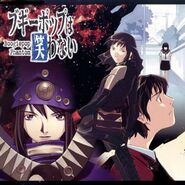 Add a photo to this gallery

Retrieved from "https://boogiepop.fandom.com/wiki/Boogiepop_Phantom_(Anime)?oldid=8415"
Community content is available under CC-BY-SA unless otherwise noted.