Minako Yurihara (百合川 美奈子, Yurihara Minako) is a minor character from Boogiepop and Others. She was the top student of Shinyo Academy, before she was murdered and eaten by the Manticore, who took her appearance as its own. 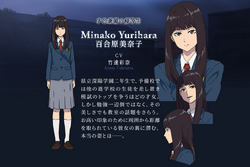 Minako is a young girl with straight, long black hair and brown eyes. She is described as wearing Shinyo Academy's female school uniform.

In the anime, Minako is shown wearing the female Shinyo Academy, consisting of a blue blazer worn over a white shirt with a red tie around the collar, and a pale blue skirt.

Minako was the top student of her school, a person who was considered by most of the teachers as a genius. However, because of her abundant talent, she was ostracized by most of her peers, causing her to become a reclusive girl with no friends. Because of this, she was the perfect target to serve as the Manticore's shape, as her lack of any kind of interaction made it much more difficult for anyone to realize the fact that she was a different person.

Minako was the child of a family that was often away from home, leading her to be a good target for the Manticore. She was a very good student, earning the top exam scores of Shinyo Academy.

Masami Saotome enters the tea room of Shinyo Academy and finds the corpse of Minako Yurihara, before being attacked by the Manticore, which was hanging on the ceiling. While being attacked, he feels happiness for some reason.[1]

Retrieved from "https://boogiepop.fandom.com/wiki/Minako_Yurihara?oldid=8650"
Community content is available under CC-BY-SA unless otherwise noted.