Witches (魔女, Majo) are the most powerful existences in the Kadonoverse. They are the fccus of Repent Walpurgis. The only known Witches are Walpurgis and Alcestis, with the addition of Rikki Tikki Tavi, who was created from the energy discharge resulting from the two's interaction.

The two twin Witches have inhabited Earth for centuries, living through human hosts. In the case of Walpurgis, she dwelled within Nagi Kirima's mother, Kyouko, before being transferred to her daughter when she gave birth. Alcestis' only known host is Koyomi Myouga.

Dr. Kugito theorized that the two Witches are bodies of energy originating from space. The two are referred to as the 'logic of the universe', and it is mentioned that if they somehow disappeared, the universe would disappear along with them.

The two Witches are the origin of all MPLS abilities. Additionally, Alcestis is also the founder of the Towa Organization. Rikki Tikki Tavi is a creature taking human form, born from the energetic discharge produced by the two Witches interacting with one another during the course of the Witch War.

It should be noted that, while the two Witches are described as the Witch of Fire and Witch of Ice, respectively, these are not descriptors of their core attributes, as they have manifested throughout the ages with many other titles, representing many other phenomena.

As the origin of MPLS, the two Witches' abilities could also be considered MPLS abilities. However, the Witches are infinitely more powerful. Not even the Wonder Bearers' abilities can be compared to the Witches, and even the Empty Fang, who are also capable of near omnipotent feats, such as time travel, can stand up to them.

The unique ability possessed by Walpurgis is Repulsion, the ultimate repulsive force that can repell anything. It is active on Earth at all times, and is capable of instantly decimating all her opponents. It also has the side effect of generating vast amounts of energy. This ability is in exact opposition to Alcestis, who possesses Attraction, the ultimate attractive force that can pull anything. It is capable of creating an energetic black hole, which captures anything.

Aside from their unique abilities, the two Witches share an equal amount of power, and are capable of feats such as time manipulation, interference with parallel worlds, traveling between universes, reading the minds of every living being on Earth, tearing apart the fabric of the universe, interference with the soul and manipulation of fate.

Rikki Tikki Tavi has the ability of the same name, capable of repelling any sort of malicious intent directed towards it. This ability is later transferred to Aya Orihata, who becomes the creature's host.

Due to dwelling inside of humans, the Witches' natural appearance, if they have one, is never revealed. However, when the Witches presume total control over their hosts, their appearance slightly changes. In the case of Walpurgis, while she retains Nagi's body shape and face structure, her skin turns red, with multiple straight, spiked tattoo like black lines running around her body. Her hair also becomes elongated and turns white, and her eyes turn red. In Alcestis' case, the skin turns a bluish gray, with similar tattoo like lines around her body, but wavy and missing the spikes.

In its original body, Rikki Tikki Tavi took the form of a short young man with black hair. Its most recognizable feature is its signature orange hood, with a belt tying it together, and a black triangle pattern around the edge of the hood. 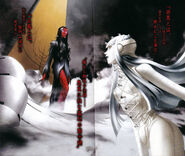 Oris Quart and Bias Li Carz.
Add a photo to this gallery

The Witch War (魔女戦争, Majo Sensō) is the name of the conflict between the two Witches that has been active since their birth. This War is described as 'destiny', and is said to continue going on forever as the twins travel through time with human vessels.

Retrieved from "https://boogiepop.fandom.com/wiki/Witch?oldid=7879"
Community content is available under CC-BY-SA unless otherwise noted.